We have succeeded in growing single crystals of a plutonium based superconductor PuRhGa5, and clarified the mechanism of superconductivity. The upper critical field Hc2 was found to be very anisotropic. From Ga NQR study, the superconducting gap on the Fermi surface was found to be anisotropic with line node gap. These results indicate that new mechanism of superconductivity due to the magnetic fluctuation is realized on PuRhGa5. The result was reported in "Science News" on June 10, "Nikkan-Kogyo Shimbun" on June 17, and broadcasted by NHK. The paper was selected as "Papers of Editor's Choice". The work has been done in collaboration with Japan Atomic Energy Research Institute and Osaka University. 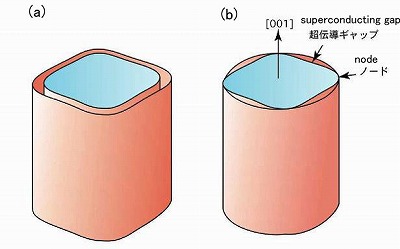