Laboratory for Computational Materials Science (Kawazoe Lab) has been successfully shown that the third carbon crystal K4 after diamond and graphite should exist by the first principles calculations as a CREST team with Prof. Kotani, Prof. Ajiri, and Prof. Sunada. This K4 carbon crystal has an atomic structure in 3 dimensional space composed with sp2 bondings between all carbon atoms, differently to 2 dimensional structure in graphite. Diamond has also completely different which composed of sp3 bondings. This K4 crystal is metallic in nature, and it is expected that by doping we can create stable superconductor, macroscopic conducting line, etc. which have been difficult to be realized by carbon nanostructures. Actually computations have been performed by Dr. Masahiro Itoh in Ajiri Lab. This result was published in Physical Review Letters (PRL 102 , 6 Feb, 2009) and reported in a number of newspapers, such as Nikkei Sangyo Shimbun, Nikkan Kogyo Shimbun, Kahoku Shimpo, and Tokyo Shimbun. 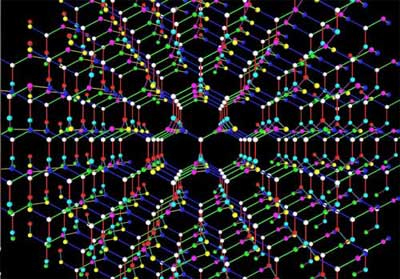 Figure: The third carbon crystal K4 after diamond and graphite.