The Hot Attraction of Gold

Gold had long been considered a non-magnetic metal. But researchers at Tohoku University recently discovered that gold can in fact be magnetized by applying heat.

They discovered that an electron spin - the origin of magnetism - plays an important role in a material's functionality at a non-constant temperature, where the magnetization and the heat flow interact. A subsequent experiment confirmed, for the first time, that magnetization in gold can be induced by the heat flow driven by a temperature change.

The set up of the experiment was quite simple, involving a bilayer comprising Yttrium iron garnet (YIG), which is an insulator magnet, and a thin film of gold. (Fig below).

In the experiment, the temperature of the YIG side and that of the gold side were kept different to drive a heat flow perpendicular to the bilayer. In addition, a magnetic field was applied in parallel to the heat flow. Under this condition, the Hall voltage*1 was measured in the gold film by in-plane electric current. The Hall voltage showed a clear proportional dependence on the applied temperature gradient.

The team interpreted this Hall voltage as evidence of the evolution of magnetization in the thin gold film due to the heat flow. The Hall voltage was named as a non-equilibrium anomalous Hall effect (nAHE).

"We are excited about the potential of this measurement as a standard method of detecting non-equilibrium magnetization because there's no need for complicated processing and technologies as compared to other highly sensitive magnetometry," says researcher Dazhi Hou. "On top of that, we can detect extremely small magnitudes of magnetization in this measurement. Such small magnetizations is the key to revealing as-yet-unknown useful properties of matters."

"These findings are expected to contribute to the development of innovative spintronics in the use of thermoelectric applications, like energy harvesting, adds Professor Eiji Saitoh, who led the research.

Details of this study were published online on July 26, 2016 in Nature Communications. This research was achieved as part of JST-ERATO "Spin Quantum Rectification Project" led by Professor Eiji Saitoh. 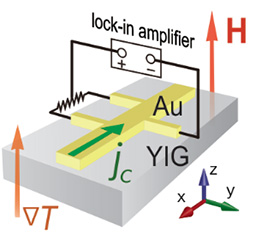 Hall voltage measurement in the bilayer system under the temperature gradient and external magnetic field perpendicular to the bilayer.